How Atheists Live In Denial 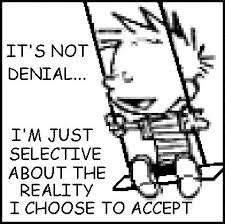 What is the next FSM of atheism that I would like to address?  Morality.

What Atheism Should Conclude About Morality

Why should atheism conclude this?  Because morality cannot be scientifically measured.  I am fully aware of Sam Harris’s attempt to measure morality in The Moral Landscape.  I have briefly written on his conclusions before.  The problem is that Harris does not actually measure morality; he measures the body’s response to certain thoughts or behaviors.  Our response to certain thoughts or behaviors is not what defines morality.  Harris incorrectly defined morality in The Moral Landscape, so I once again encourage you to read my post I linked above.

It is disingenuous for some atheists to use the term morality when referring to a code by which they believe people should act.  Why?  Because for the vast majority of people, the term morality carries much  more weight than just preference.  Even many moral subjectivists would demand that all people have a moral code that includes 1) no person should unjustly harm another, 2) people should seek to help others in need, and 3) respect for all people should be shown.  So even people who do not believe morality is absolute incompatibly have a standard of morality.

I want to be clear that I am not saying that atheists are immoral by nature.  I am saying that atheists should claim amorality in their worldview.  Amoral means that they hold no moral standards.  If atheists were to honestly critique their worldview, they should conclude that the universe is amoral.  They should conclude there is no natural or physical law to conclude what is “good” or “bad”.  Again, they can conclude that an action is “preferred” or “not preferred”, but it is disingenuous to claim one’s preference as good or bad for someone else.

I had an intellectual foray into atheism and blogged about it, and I think you would find it interesting supplemental reading material.

If atheists still want to use the word morality for their purposes, they should admit that everything they call moral is completely subjective.  To be sure, many atheists already claim moral subjectivism, but rarely do they apply the principle of moral subjectivism in their moral claims.  As I mentioned above, many moral subjectivists still demand all moral codes to at least include 1) no person should unjustly harm another, 2) people should seek to help others in need, and 3) respect for all people should be shown.  If some moral code does not contain these three essentials, then the moral code would be deemed immoral or lacking.

But how can a completely subjective thought be found lacking?  There is nothing there for it to lack.  If beauty is in the eye of the beholder, who are we to tell someone that their judgment of what is beautiful is lacking?

But that is what I find many atheists doing all the time in regards to morality.  I find them insisting that empathy, compassion, and respect for others to be required from all people.  How can they do this and still posses a coherent worldview?  In my next blog I am going to discuss how some atheists hypocritically demand that other people live by their preferences … or else.

Atheism should conclude that morality, as commonly understood, does not exist in actuality.  In order for atheists to use the term morality for their own purposes, they need to redefine the commonly understood meaning of morality.  Preference is a more accurate word to use for atheism.

Many atheists are living in denial that their worldview calls for them to completely abandon the common understanding of morality.  Many atheists still want to claim morality as fitting into their worldview when it simply does not logically exist according their own worldview.  If atheists want to still use the term morality, then they should make clear to all people every time they talk about morality that they are simply describing what they prefer people do.  They should admit that there is no intrinsic requirement that others act they way they prefer.

I am going to yet again quote C. S. Lewis in Mere Christianity, “If I find in myself desires which nothing in this world can satisfy, the only logical explanation is that I was made for another world.”

*I want to briefly note that I am not attacking atheists and I am not trying to be mean-spirited to any atheist.  When I refer to atheists, I usually am referring to a certain group of atheists with a certain mindset.  If you are not of the same mindset, then please do not think that I am charging you with the same mindset.  I try to say “some atheists” or “many atheists” often enough in my post to hopefully make this clear.  However, there are some times when I refer to atheism instead of atheists.  When I do this, I am making a statement about the worldview of atheism and what the logical conclusions of atheism should be.  I completely understand that there are some people who do not follow the logical conclusions of their worldview and I acknowledge that there are different branches of atheism.  Please do not read any anger into my text.  If I were speaking this text to atheists, I would be speaking sincerely, yet calmly and kindly.